It’s been a few years now since I walked my grubby, DEET-covered feet across the Cambodian border into Laos. I’ll never forget the feeling of serenity that gently enveloped me from the moment I did.

Kakada, our guide, had told us of a famous saying invented by French colonisers to highlight cultural differences in the-then Indochina. ‘The Vietnamese plant the rice, the Cambodians watch the rice grow and the Lao listen to the rice grow’.

There is a sense that when in Laos, life should and can only be enjoyed at a snail’s pace; where one should surrender to the searing sunshine by lazing the days away and never moving too hastily. Only after spending a few days in Laos did I learn that there was more to this land than steamy rainforests and peaceful temples.

As our little bus dipped and swerved its way down the Cambodian ‘highway’ separating the two countries. Kakada sharply asked us to spot an obvious difference between what we saw on our left and on our right. To our left, Cambodia looked like a land stripped of its earthly carpet; its bony cattle and idle children harshly exposed in the barren dust. While to our right, lush, vividly-coloured forests and distant mountains held the promise of abundance in Laos.

Kakada, proudly Cambodian and unashamedly forthcoming with facts about the escalating corruption in his country, explained how his government pillaged the land for anything they could sell, while in Laos, despite the constant threat of industrial growth from neighbouring China, the government had retained its rainforests.

Once over the border, we briefly stopped at the mighty Khone Phapheng falls. Despite the cooling mists of water spraying my sweaty skin, it suddenly felt a whole lot warmer north of the border. After lunch and group photos (and being aggressively ‘nudged’ by a tourist trying to squeeze into her own group photo) we left for Don Không.

Once over the border, we briefly stopped at the mighty Khone Phapheng falls. Despite the cooling mists of water spraying my sweaty skin, it suddenly felt a whole lot warmer north of the border. After lunch and group photos (and being aggressively ‘nudged’ by a tourist trying to squeeze into her own group photo) we left for Don Không.

In Don Không we rode bicycles along the dirt road to the sound of crickets and in the distance, local music that sounded like rockabilly with a reggaeton beat. That music I would hear throughout my time in Laos. After riding past the water buffaloes languidly reclining in the shade, we stopped at a roadside shack for our first Beerlao and to try none other than grilled water buffalo. It must have been about 40 degrees that day and while the beer was a blessing, the meat not so much.

The next morning at Wat Phu, an Angkorian temple complex and more humble cousin to Angkor Wat, the effects of the grilled water buffalo were felt. It was a shame, because the surrounding Champasak countryside held more beauty for me than Angkor Wat. Perhaps it was just because there were far fewer tourists by comparison. But the blazing sun did its thing and I soon made for the little cafe with heavenly cold water, air-conditioning and the ladies room. No water buffalo. EVER again.

From Wat Phu we made our way to Pakse, where we boarded motorised rafts and made our way across the Mekong to Don Deng. We made it, however the rafts stopped short of the shore. As we waded through the water with backpacks on our heads, I caught sight of monks mowing the lawns with hand mowers. We were to stay in the village, divided among the families. I’d been so excited about this part of the trip, but my stomach growled and hissed at me in protest.

At the homestay I spent much of the time holding babies and observing a life so foreign to me play out before my eyes. I was mesmerised and felt very grateful to be there. Just before the sun came up we were gently woken by monks chanting and the not-so-melodic crowing of roosters. After breakfast with the families and a tractor ride around the island, we were back on the rafts to the mainland.

That night we flew to Luang Prabang in the heart of northern Laos. After dumping our packs we wandered through the lively night market, a little shell-shocked after being in a rural village and now seeing ex-pats and tourists everywhere, with vendors shouting and the darkness lit up by fairy lights and trinkets. The morning brought a fresh calmness and, as we tentatively meandered through the streets, I decided I could possibly live in this vibrant haven. I fell head over Birkenstocks for Luang Prabang. In these lovely days I awoke before dawn to witness the monks receiving alms, bought street art, walked and dawdled and climbed, had much sticky rice, met ex-pats who now called this town their home and breathed in the fresh mountain air warmed by the sun. I loved that from the relative busyness of the town you only had to look to the other side of the Mekong to know that the wilderness was all around.

On one of these happy days, our now close-knit little group ventured out of town to the Kuang Si waterfalls. This rainforest wonderland also contains an Asiatic black bear rescue centre, a special place in a region where illegal wildlife trading is unfortunately prolific. But it was the powder-blue water strewn with stray branches and ferns that stole my heart. Most of the group decided to go for a swim – the sensible option. I decided I would climb up the muddy face of the waterfall with two of the guys to catch a view from the top. It was not a wise decision; the fast-flowing water up the top was precarious at best and coming down meant sliding on my butt. So much fun!

I didn’t want to leave Luang Prabang, but our little bus had to continue on. We wound our way in and out of the low clouds tucked between the valleys of the high mountain peaks, eventually making our way to a chilly pit stop before descending to our next destination.

In Vang Vieng, the adventure capital of Laos and once synonymous with riskier undertakings by backpackers, I was surprised to find a sleepy town with a beautiful view of limestone mountains to the north. The riskiest thing we did was to have a massage; females and males separated by a flimsy curtain, and where we could hear uncomfortable sounds from the males when offered optional ‘extras’. Dinner was an array of delicious Lao delights by the river, on a bamboo-enclosed pontoon lit-up by lanterns.

If we were starting to feel as though Vang Vieng couldn’t be further from once being the capital of excess, the ominous laminated ‘guidelines’ in each of our rooms solemnly reminded us. ‘Smoking opium, selling and buying opium, narcotics, all kinds of gambling, having sexual intercourse and political gatherings are strictly prohibited inside the hotel’. Well, no fun for us then.

We did decide the next day to venture to the Irish pub. We loved all of the sticky rice and larb and tropical fruits we had eaten, but after a few weeks of sticky rice we were hanging for hamburgers. Very Irish fare, indeed.

From Vang Vieng it was onto our final destination in Laos, the capital Vientiane. We were told it was perhaps the sleepiest capital in the world, and my word, it really was. There was something truly lovely about it, though. French colonial influences could be seen in the architecture and the cafes selling baguettes, yet Vientiane was truly the centre of all things Lao.

That night, after a day walking its tranquil streets, we headed out for our last group dinner and to a bar for a few games of pool, and then, to the last place I expected to find in Vientiane, a nightclub. It was the complete antithesis to everything Vientiane was for me. Here, I danced to the thumping music without a care, made firm friends in the ladies room with ladyboys and ladygirls, and had a few cheeky cocktails, because for $2 each I felt it sinful not to. When I made it back to the hotel at ungodly o’clock and crept into the room I shared with my poor roomie of many weeks, I thought that at the ripe old age of 33 (my fellow party-goers were a little younger, so this felt relatively old) I would pay dearly. But to my amazement I awoke with the alarm at 7 a.m. and headed out with only the strongest of us to see the final temple of my trip.

Wat Si Saket restored my feeling of peace immediately. It was majestic and bold in all of the ways I expected the oldest temple in Lao to be. It was at the COPE centre, however, that I had my most profound experience in Laos. The Cooperative Orthotic and Prosthetic Enterprise exists to assist those affected by landmines. The extraordinary visitor centre serves not only as a gallery showcasing installations and artworks created with mine shells and prosthetics, but also as an information hub for those, like me, who had no idea of the suffering the Lao have endured and continue to endure as a result of landmines. Here I remember wishing I hadn’t been so ignorant and that I were enlightened sooner, so as to view my earlier travels through this lens. But I was also well aware that these sad occurrences did not define the spirit of the Lao people, as evidenced by the artwork and photographs of mines being fashioned into household items.

I learnt that 260 million cluster bombs were dropped on Laos by the US Army during the Vietnam War, 80 million of which did not explode. Each year there are 300 casualties and since the end of the conflicts there have been 20,000 victims.

Apart from the obvious horror of these statistics, it is that this devastation has perpetuated ongoing poverty that is of much sadness, given limitations to agricultural development and that those most affected have been males, largely the primary wage earners. I was heartened to learn last year that the then President, Barack Obama, acknowledged the ‘secret war’ and pledged greater financial aid to Laos. We returned to the larger group a little quieter after this experience.

That evening we boarded the night-train that would take us to where our adventure began, in Bangkok. It was with a very heavy heart that I farewelled my new friends, who would depart from Bangkok to far-off places. I was incredibly grateful for the experience of coming together with a group of strangers and leaving with a fullness in my heart, and now, even more grateful to have magical memories of a region that I will one day return to with Baby G. 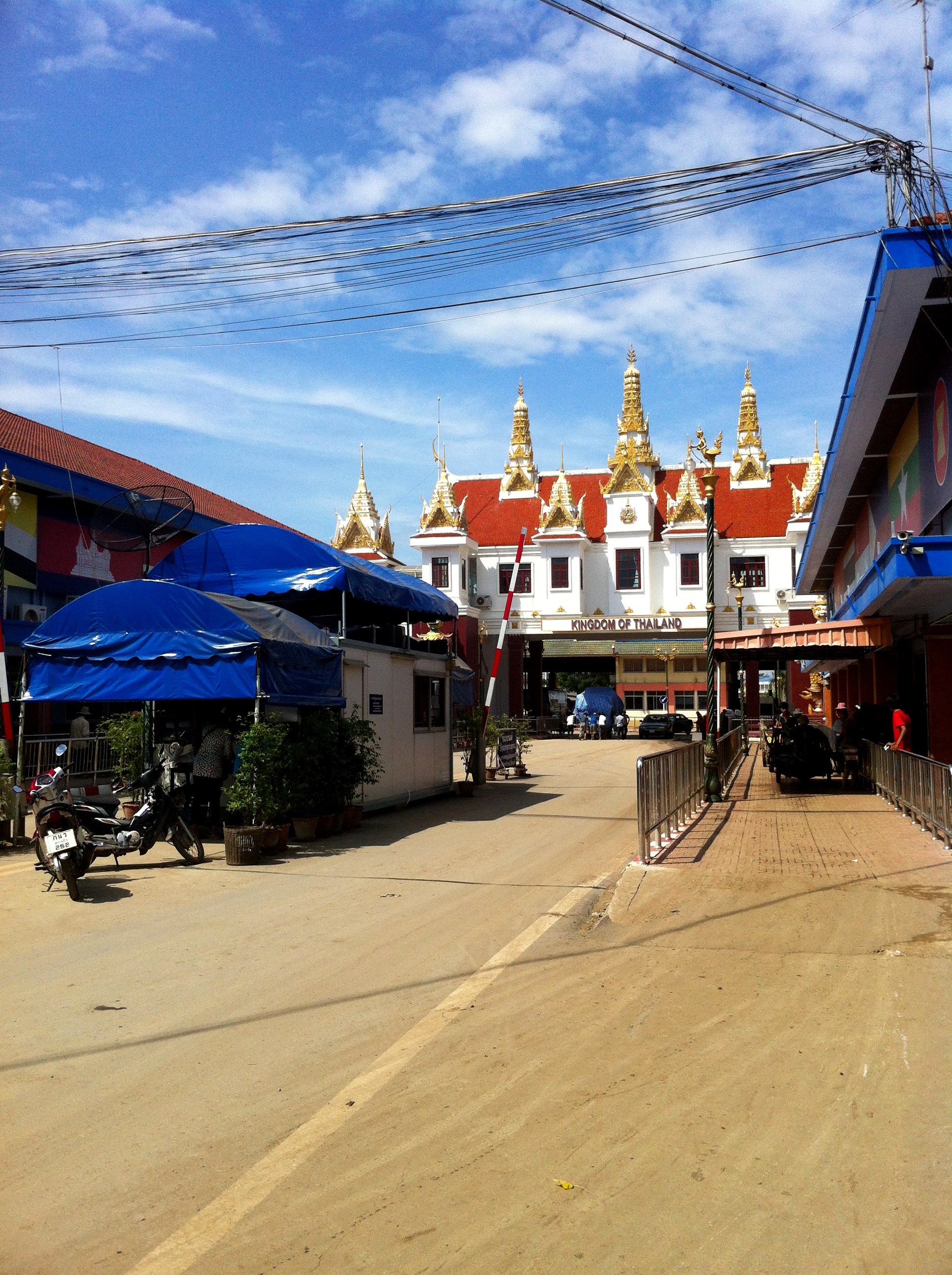